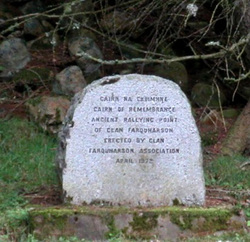 THE FARQUHARSON CAIRN -  CÀRN-NA-CUIMHNE or CAIRN OF REMEMBRANCE

Cairns are a quite distinct part of the Scottish landscape.
Piles of stones and boulders are dotted around, probably mainly seen at the side of a road from the comfort of a car, or by a footpath when out walking.  The piles of stones vary in size from several hundred down to a dozen or so, and the sizes of the stones vary from ones the size of a man’s fist to some weighing quite a few kilograms.

In Scotland many cairns were rallying points before battles or other smaller skirmishes.  Each man on receiving his Chief’s call, would hasten to a pre-arranged meeting point and on arrival would place his stone on the ground, or if there was already an established pile, on the pile, and remove it again after the action.  The number of stones remaining would be counted to determine the Clan’s losses.

These cairns are quite sacred to us who know what they are and will trigger reflection on Clan history.

To the Farquharsons, the Cairn of Remembrance, or Càrn-na-Cuimhne in Gallic, is both the name of the place at the foot of Glen Eardar, and the rallying cry for the Clansmen.  The latter usage translates as “Remember the Cairn!” or more specifically “Remember the Fallen!"


The Farquharson Clan Cairn, Càrn-na-Cuimhne, is situated in a beautiful place on the north-side of the river Dee just south of the A93.  It is about half a mile west of Balmoral Castle near Invergelder. There are Police ‘No Stopping’ signs each side of this point on the road as this is also the best view of Balmoral Castle from the road.

About a quarter of a mile further west along the road towards Braemar, there is a lay-by on the south side of the road.  From here there are a path and a small sign pointing towards the Cairn . The path can be muddy and overgrown, often with stinging nettles.  But the effort to get there is  worthwhile.  One cannot help but be awed by the pile of stones, now behind a fence. There would be upwards of a thousand, possibly even several thousands of stones, accumulated there over 500 years of Clan history.  With the backdrop of the Dee flowing by and the native pines that have grown on the rivers-edge on the site, it is a powerful reminder of the earlier sacrifices of the Clansmen and the meaning of Clan.
​
Nearby is an engraved stone placed there by the Clan Farquharson Association UK in 1972, recording the purpose of the Cairn.

The Clansmen come to this place every year usually in mid-August for a brief Prayer Service and to pay homage to the Clan fallen. 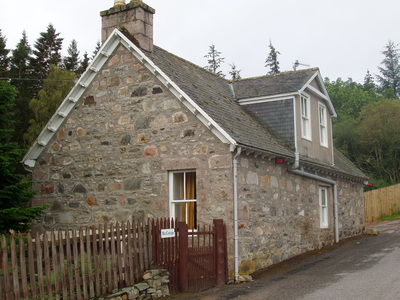 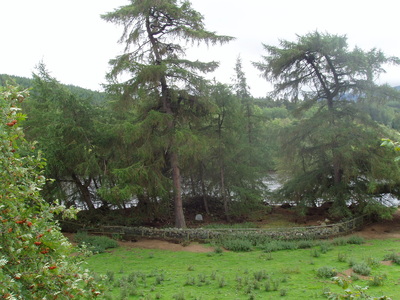 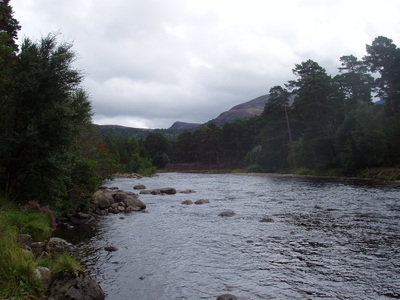